Banks are now ready for their second act.

On Thursday, eight Indian banks announced that they are rolling out — or about to roll out — a system called Account Aggregator to enable consumers to consolidate all their financial data in one place. (Participants banks are HDFC, Kotak, ICICI, Axis, SBI, IndusInd, IDFC, and Federal Bank. Four of them are rolling out the system Thursday, others say they will roll out the new system soon.)

The objective of Account Aggregator (AA) is to aggregate all financial information of an individual, said M Rajeshwar Rao, Deputy Governor of India’s central bank — Reserve Bank of India — at a virtual event Thursday.

The new system makes it possible for banks, tax authorities, insurers, and other finance firms to aggregate data of customers — who have provided their consent — to get better understanding about their potential customers, make informed decisions and ensure smoother transactions.

“For retail loan underwriting (“eligibility check”), rather than submitting previous 3 years bank statements, I can simply authenticate a data transfer via AA (and revoke the data transfer AFTER the loan is approved or sanctioned). For self-employed or freelance professionals, getting Term Insurance has always been difficult since they cannot prove their income – AA lets you provide an audit trail of past income to underwrite the Term Insurance application,” Rahul Mathur, founder and chief executive of insurance aggregator startup BimaPe, told TechCrunch. 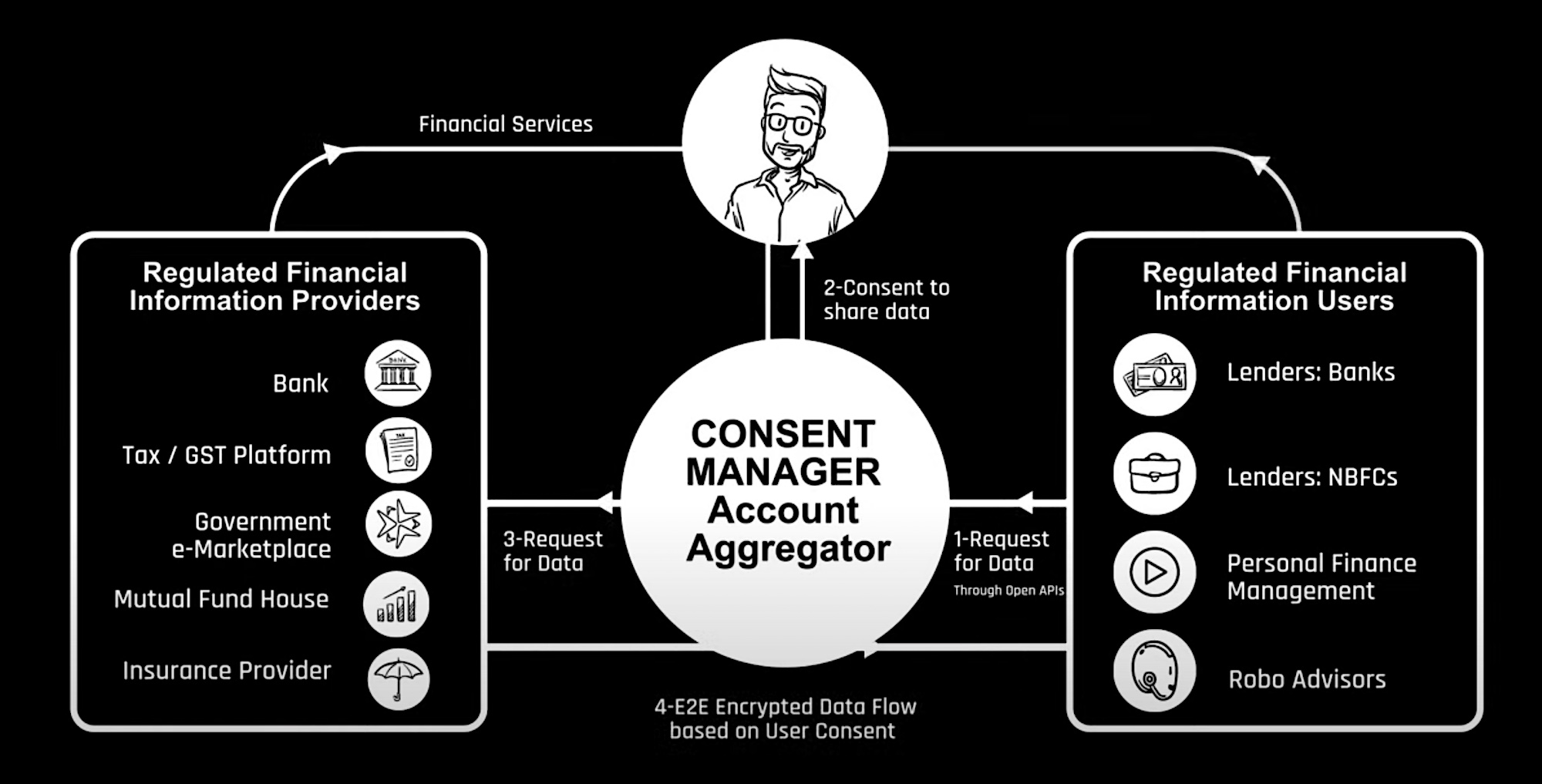 An illustration of how the AA system works.

Account Aggregator is built in part to help consumers and businesses access financial services such as loans. Existing credit bureaus in India have data of only a fraction of the nation’s 1.4 billion population, which makes it very difficult for most in the country to access working capital, explained Infosys chairman Nandan Nilekani, who’s been an adviser to Account Aggregator, at the event Thursday.

“Talks are on to onboard telecom operators as well,” he said, adding that the system has already achieved the sophistication that it could be extended to other industries.

“It’s an architecture that can now be applied to several additional industries,” he said, pointing to healthcare, fitness, testing labs as examples. “We can confidently say that there is no other country in the world that has built a robust infrastructure of this kind and at scale where its people can leverage their data. This approach is now getting global recognition.”

The Account Aggregator system is also positioned to dramatically increase the addressable market for online insurers, lenders, and players in several other industries.

“This is a big step towards a connected financial ecosystem, and will be very significant in Fi’s journey to help working millennials get better with their money. With the successful demonstration of the framework today we are excited to have all our users experience the power and convenience of the AA integration once it’s rolled out to all users,” said Sumit Gwalani, co-founder of Fi.

A massive ‘stalkerware’ leak puts the phone data of…

How to remap your Chromebook’s keyboard

Actual, which renders company ESG data in a SimCity-like…

How big companies kill ideas — and how to fight back, with…

Broken Your Samsung Galaxy Screen? You Can Now Repair It…