How many of us have not switched insurance carriers because we don’t want to deal with the hassle of comparison shopping?

Today, Insurify, a startup that wants to help people make it easier to get better rates on home, auto and life insurance, announced that it has closed $100 million in an “oversubscribed” Series B funding round led by Motive Partners.

Existing backers Viola FinTech, MassMutual Ventures, Nationwide, Hearst Ventures and Moneta VC also put money in the round, as well as new investors Viola Growth and Fort Ross Ventures. With the new financing, Cambridge, Massachusetts-based Insurify has now raised a total of $128 million since its 2013 inception. The company declined to disclose the valuation at which the money was raised.

Since we last covered Insurify, the startup has seen some impressive growth. For example, it has seen its new and recurring revenue increase by “6x” since it closed its Series A funding in the 2019 fourth quarter. Over the last three years, Insurify has achieved a CAGR (compound annual growth rate) of 151%, according to co-founder and CEO Snejina Zacharia. It has also seen consistent “2.5x” year-over-year revenue growth, she said.

Insurify has built a machine learning-based virtual insurance agent that integrates with more than 100 carriers to digitize — and personalize — the insurance shopping experience. There are others in the insurtech space, but none that we know of currently tackling home, auto and life insurance. For example, Jerry, which has raised capital twice this year, is focused mostly on auto insurance, although it does have a home product. The Zebra, which became a unicorn this year, started out as a site for people looking for auto insurance via its real-time quote comparison tool. Over time, it has also evolved to offer homeowners insurance with the goal of eventually branching out into renters and life insurance. But it too is mostly focused on auto.

Zacharia said that since Insurify’s Series A funding, it has expanded its home insurance marketplace, deepened its carrier integrations to provide users an “instant” purchase experience and launched its first two embedded insurance products through partnerships with Toyota Insurance Management Solutions and Nationwide (the latter of which also participated in the Series B funding round). 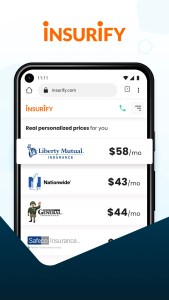 Last year, when ShyScanner had to lay off staff, Insurify scooped up much of its engineering team and established an office in Sofia, Bulgaria.

Zacharia, a former Gartner executive, was inspired to start the company after she was involved in a minor car accident while getting her MBA at MIT. The accident led to a spike in her insurance premium and Zacharia was frustrated by the “complex and cumbersome” experience of car insurance shopping. She teamed up with CTO Tod Kiryazov to build Insurify, which the pair describe as a virtual insurance agent that offers real-time quotes.

“We decided to build the most trusted virtual insurance agent in the industry that allows for customers to easily search, compare and buy fully digitally — directly from their mobile phone, or desktop, and really get a very smart, personalized experience based on their unique preferences,” Zacharia told TechCrunch. “We leverage artificial intelligence to be able to make recommendations on both coverage as well as carrier selection.”

Notably, Insurify is also a fully licensed agent that takes over the fulfillment and servicing of the policies. Since the company is mostly working as an insurance agent, it gets paid new and renewed commission. So while it’s not a SaaS business, its embedded insurance offerings have SaaS-like monetization.

“Our goal is to provide an experience for the end consumer that allows them to service and manage all of their policies in one place, digitally,” Zacharia said. “We think that the data recommendations that the platform provides can really remove most of the friction that currently exists in the shopping experience.”

Insurify plans to use its fresh capital to continue to expand its operations and accelerate its growth plans. It also, naturally, wants to add to its 125-person team.

“We want to build into our API integrations so customers can receive real-time direct quotes with better personalization and a more tailored experience,” Kiryazov said. “We also want to identify more embedded insurance opportunities and expand the product functionality.”

The company also down the line wants to expand into other verticals such as pet insurance, for example.

Insurify intends to use the money in part to build brand awareness, potentially through TV advertising.

“Almost half of our revenue comes from self-directed traffic,” Zacharia said. “So we want to explore more inorganic growth.”

James “Jim” O’Neill, founding partner at Motive Partners and partner Andy Rear point out that online purchasing now accounts for almost all of the growth in U.S. auto insurance.

“The lesson from other markets which have been through this transition is that customers prefer choice, presented as a simple menu of products and prices from different insurers, and a straightforward online purchasing process,” they wrote via email. “The U.S. auto market is huge: even a slow transition to online means a massive opportunity for Insurify.”

In conducting their due diligence, the pair said they were impressed with how the startup is building a business model “that works for customers, insurers and white-label partners.”

Harel Beit-On, founder and general partner at Viola Growth, believes that the quantum leap in e-commerce due to COVID-19 will completely transform the buying experience in almost every sector, including insurance.

“It is time to bring the frictionless purchasing experience that customers expect to the insurance space as well,” she said. “Following our fintech fund’s recent investment in the company, we watched Insurify’s immense growth, excellent execution with customer acquisition and building a brand consumers trust.”

When Does Episode 11 of Andor Land on Disney Plus?

How to enable your Mac’s VoiceOver screen reader

Varjo, an early mover in building XR headsets and software…